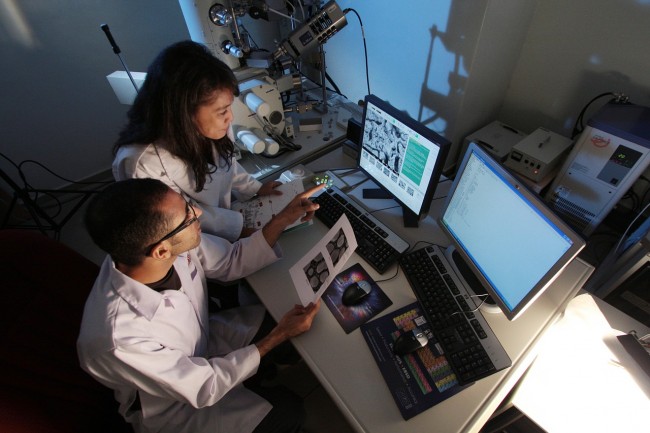 Proteins are composed primarily of long chains of much smaller units known as amino acids. There are more than 20 known amino acids that can combine to form a larger protein, and they interact with and bind with one another in ways that influence the protein's final structure. Depending on these interactions, long chains of amino acids fold in primary, secondary, tertiary, and quaternary formations until the protein achieves its final, three-dimensional structure.

Since most hydrophobic interactions are relatively strong, researchers always assumed that hydrophobic amino acids had the most influence on the way proteins folded and became stable. As a result, many proteins were presumed to develop a particular folded structure to avoid contact with water. However, new research shows that many protein folding models failed to include another phenomenon that influences protein folding - temperature.

New research performed in collaboration between scientists at Tulane University, Rice University, and the Johns Hopkins University School of Medicine has revealed that temperature affects protein folding in ways previously unknown. To begin, researchers decided to examine previous studies on disorganized proteins and other polypeptides that do not fold under normal conditions. Previously, hydrophobic interactions were thought to prevent folding, dominating the weaker, electrically charged interactions that usually promote the behavior.

However, in those studies, which took place in 2014 and 2017, researchers had not examined the effects water temperature had on the interactions - effects current researchers suspected may have more influence over protein folding than previously thought. To learn more, the team created a model of a hydrated deca-alanine peptide and its corresponding side chains and exposed it to water at increasing temperatures. Then, they calculated the forces of attraction between the solvent and the peptide itself.

As temperatures increased, the solvent's matrix expanded, decreasing the solvent's ability to contact the peptide. As a result, the potential for binding diminished as well. Overall, researchers found that the effect of temperatures on binding suggests that hydrophobic interactions in heated solutions could promote proper protein folding. In contrast, hydrophilic reactions in colder solutions could promote protein denaturation (unfolding).

Considering All Aspects of a Solution

Although researchers once thought hydrophobic and hydrophilic interactions were the predominant factors leading to protein folding and stability, this new research has highlighted the importance of considering all aspects of a solution. Temperature can affect the strength of hydrophobic and hydrophilic interactions, and some interactions are dependent on the solution remaining within a specific temperature range to proceed. Thus, the entirety of the solution environment - including the water involved as well as the temperature, electrical charge, and other factors - influences the final folded shape of the protein.

As research moves forward, careful attention to the various interactions in play will be vital to address the way proteins stabilize. Individual attention to each potential force - and the way all work together or compete with one another - will help researchers take the next steps necessary to determine the reasons proteins behave the ways they do. In the future, additional knowledge about why proteins fold or unfold could lead to surprising new discoveries about the way protein stability affects some of the most critical mechanisms in the human body.