Stellar Beauty: Another Look at the Orion Nebula

A new view of the Orion A star-formation cloud from ESA’s Herschel space observatory shows the turbulent region of space that hugs the famous Orion Nebula.

The nebula lies about 1500 light years from Earth within the ‘sword of Orion’ – below the three main stars that form the belt of the Orion constellation.

In this view, the nebula corresponds to the brightest region in the centre of the image, where it is lit up by the Trapezium group of stars at its heart.

The scene is awash with turbulent star formation, the fierce ultraviolet radiation of massive new born stars blasting away their surrounding cloudy cocoons, carving ethereal shapes into the gas and dust.

Wispy tendrils rise like flames away from some of the most intense regions of star formation, while pillars of denser material withstand the searing blaze for longer.

Great arms of gas and dust extend from the Orion Nebula to form a ring, while a spine of cooler material weaves up through the scene to a halo of cloudy star-formation material above.

Embedded within the red and yellow filaments are a handful of point-like sources: these are protostars, the seeds of new stars that will soon ignite and begin to flood their surrounds with intense radiation.

The black regions to the top of the image and to the bottom right may seem like voids, but actually contain hints of much fainter emission that has not been emphasised in this image.

The red ‘islands’ of emission in the bottom right are also a subtle trick of image processing for they are connected to the main cloud by much fainter emission. The bright ‘eyes’ in the two most distinct clouds indicates that the tip of each pillar has already collapsed and is forming stars. -- ESA 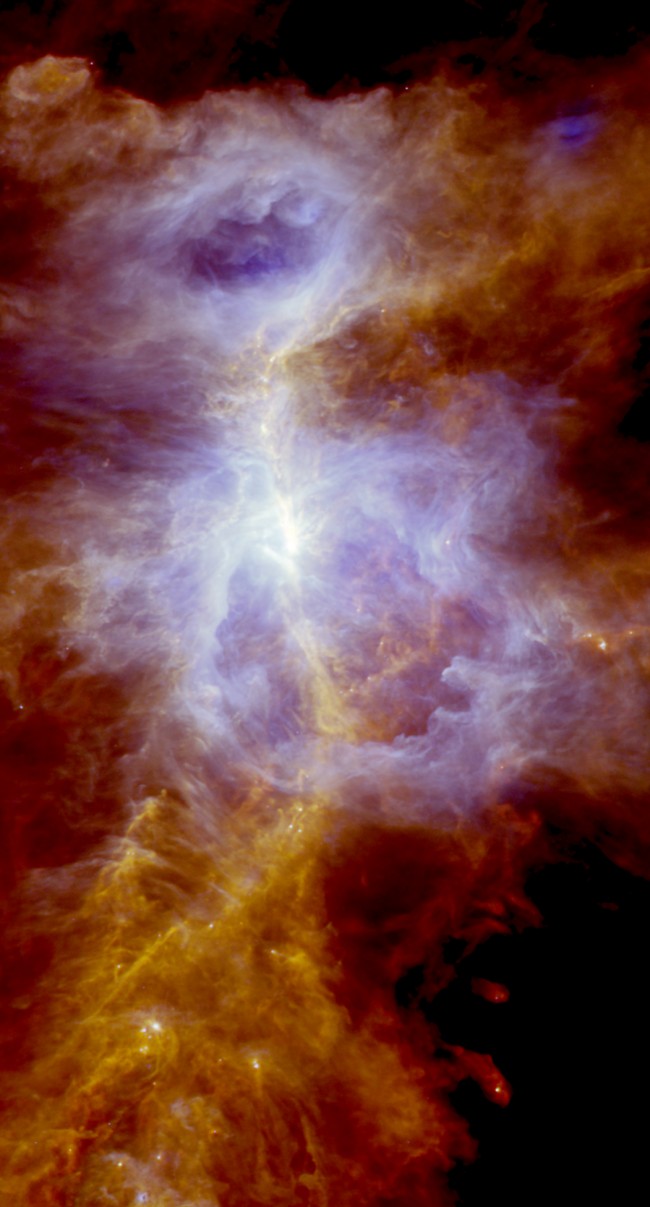 Molecules from the surface of any samples are removed (sputtered) through the process of ToF-SIMS which involves the use of a pulsed primary ion beam. The mass of the sputtered secondary ions is determined by means of a time-of-flight mass analyzer.

With all the excitement generated by private companies launching satellites into space, potentially providing high-speed Internet access across the planet, few are thinking about the repercussions of the space ...

A space startup by Mikhail Kokorich plans to go public. What are the risks?

Mikhail Kokorich has decided to make his space startup public through a SPAC. What risks does it involve for the company and its investors?

What Is A Thermocouple And How Does It Work?

A thermocouple is a temperature sensor that uses change in voltage to measure temperature. It has legs made up of two different metal leads placed closely to each other, as the name 'thermocouple' implies.

Private Companies Are Spreading Their Wings. Who Will Take Americans Back to the Moon?

The modern-day race to the Moon is not between superpowers but among private companies which are competing for NASA contracts. These companies are willing to invest their own money to achieve this ambitious goa...

As brand new technology becomes more accessible and more accurate, people are starting to become more invested in how they can use it to make money.

To increase income, keep expenses down, keep customers loyal, and deliver the service that patients rapidly prefer, medical practices of all types and sizes resort to telemedicine.

Scheduling a Hair Transplant Turkey - Things You Need to Know

Over the past few years, Turkey has become quite a hub for hair restoration. Medical tourism in the country has been on the rise, with men and women around the globe flocking to have hair transplants in Turkey ...

The Truth About Sleeve Gastrectomy: FAQs That You Should Know About

Contrary to common belief, weight loss isn't just simply achieved by self-will. In fact, it is even harder to lose body weight for people classified as morbidly obese, even more so for people who have existing ...

The Powerful Science Behind Napping

Every afternoon, you may experience a slump in your energy. You're sitting in your office and you find that it's hard to focus on the task before you and you're yawning continually.

How to Prepare for IV Injection as a First-timer

IV therapy is one of the most effective methods to administer vitamins and minerals directly into the body.

Tips for Coping with Anxiety

If you deal with an anxiety disorder, there are several things that might trigger an episode, including stressful family situations, giving a presentation, or having a stressful work meeting.

How Recycling Can Be Lucrative for Dentists

It is well-known that centuries of scientific research have gone into providing the exceptional dental care offered today. What most patients may not realize, however, is that dentists can also benefit from another type of scientific work: metallurgy or, more specifically, the recycling of metals.

The Incredible Perks of Using a Nitrogen Generator

Cylinders and liquid nitrogen can no longer be considered a viable option when it comes to working with a certain type of nitrogen. They can become very expensive in some cases, as well as being highly harmful ...

Ombori Partners with H&M to Forward Sustainability in Retail

According to Jackie King, the executive director of the Secondary Materials and Recycled Textiles international trade association research, 95% of all clothes that are thrown away could have been repurposed, re...

Diet for a Pet: What You Need to Know

Pet owners should know that their pets need proper diet and care. This article contains information about the proper diet for pets.

Proteins are composed primarily of long chains of much smaller units known as amino acids. There are more than 20 known amino acids that can combine to form a larger protein, and they interact with and bind wit...

Every business starts with an idea. A realized hole in the market, a product that hasn’t been created yet, a solution to a problem. The belief in an idea can be the driving force behind many entrepreneurs as ...