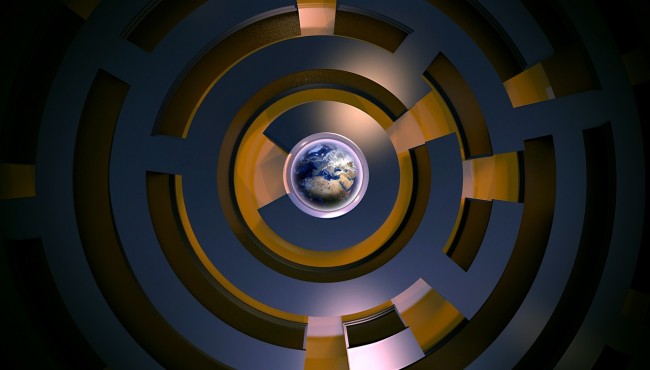 The nature of the interior of the Earth has captured the imagination of mankind even from ancient times. The stories of subterranean lands are spread across the globe to explain origins as well as destinies of people and tribes in folklore, mythology and legends. This fascination with the idea of a hollow Earth continues into modern times. For instance, in 1864, the French author Jules Verne published his second book in his popular Extraordinary Journeys series, The Voyage to the Center of the Earth. In his story, a geologist discovers a runic text which discloses, when translated into Latin and then read backwards, the existence of a tunnel inside an extinct volcano which leads into the interior of the Earth. The subterranean world that he and his two companions discover is filled with giant mushrooms and mastodon bones, a freshwater river and a sea, dinosaurs fighting, and a giant man tending a herd of mastodons. They finally escape by means of a volcanic eruption on Stromboli Island, off the coast of Italy. A great adventure story can make even the implausible seem possible.

Modern science rejects the hollow Earth theory based upon the exotic assumptions required to produce such a geometric configuration. Instead, the most natural interpretation of the universe and its phenomenon indicates that the Earth is not hollow but consists of four distinct layers, the solid outermost crust, the hotter viscous mantle, the even hotter molten outer core, and the extremely hot but solid inner core. The hard, brittle crust is the part which hosts all life as we know it and the part about which we know the most because of our ability to drill wells into it. These wells have been drilled for the most part to extract resources such as water, minerals, and oil and gas from it, but they have also allowed us to extend the knowledge of the directly observable surface geology with the interior of the crust, the first step in the scientific journey toward the center of the Earth.

Borehole measuring instruments can be lowered into the drill hole from the surface using wireline cables that transmit the measurements back to the surface in order to analyze the formations and fluids encountered by the borehole. The measurements include electrical, natural gamma ray, 3-arm caliper, electromagnetic, borehole deviation and temperature, and even video records. Coupled with the samples of the rocks that are brought up to the surface by the drilling fluids or from whole or sidewall cores taken from the wellbore itself, the results enable us to see the orientation and distribution of the sediments penetrated by the drill bit, correlating these results to other nearby wells and to the seismic profiles that cross the well. Not only do the wells help connect the well data to the seismic reflections, but they also serve to validate the accuracy and precision of the signal processing methods required to convert the seismic reflection data into the cross-sectional profile. This provides the second step in our journey.

The next question to be answered is how far, or in this case how deep can wells take us toward the center of the Earth. Unfortunately, not very deep. The deepest well ever drilled was dug by the Soviet Union over a span of twenty years on the Kola Peninsula of far northwest Russia to a depth of 40,230 feet or 12.26 km. It encountered higher temperatures than expected, 180 degrees C instead of 100 degrees, greater porosity and decrease in density causing the rocks to behave more plasticity than brittlely. In addition, abundant hot mineralized water was found at almost all depths and even fossils found in the granite. Further drilling attempts were therefore abandoned. In projects such as this, using a water well logging software and equipment company is essential.

How close did we get? The primary methods for determining the nature of the Earth's interior are provided by global seismology and geomagnetism. In particular, the measurement of seismic waves of large scale earthquakes, primarily deep seated ones which have the energy to travel through the center of the Earth and be recorded by sensors, or seismograms, on the other side, have demonstrated the following configuration for the interior. By far the thinnest portion of the Earth is the crust: the continental crust can be as thick as 30-45 km under mountain ranges and the oceanic crust 5-10 km thick. Below the crust sits the mantle, the thickest part of the Earth stretching from 30 km down to a depth of 2900 km. The uppermost part of the mantle is solid rock like the crust and together they are called the lithosphere. The lithosphere is made up of various tectonic plates that move across the next layer of the mantle, called the asthenosphere. Its relative plasticity allows the plates to move across it by means of convection. Below the mantle lies the core, divided into a liquid outer core and a solid inner core. The inner core, almost as hot as the sun, has a radius of 1220 km and spins a little faster than the rest of the planet. The outer core sits about 5180 to 2880 km below the surface. Here the Earth's magnetic field is generated and for unknown reasons can reverse its polarity every 200,000 to 300,000 years. The overall radius of the Earth is 6378.1 km; therefore our deepest well has penetrated only 0.12% of the distance to the center.

Our journey toward the center of the Earth relies heavily on the remote sensing capacities that allow us to peak into the mysteries of the interior without being able to observe them directly. It is said that the truth is often stranger than fiction, and the surprises we have encountered in the ongoing study of the Earth and its interior has certainly confirmed that statement, despite the power of imagination. We may have a long way to go, but it still promises to be an exciting trip.